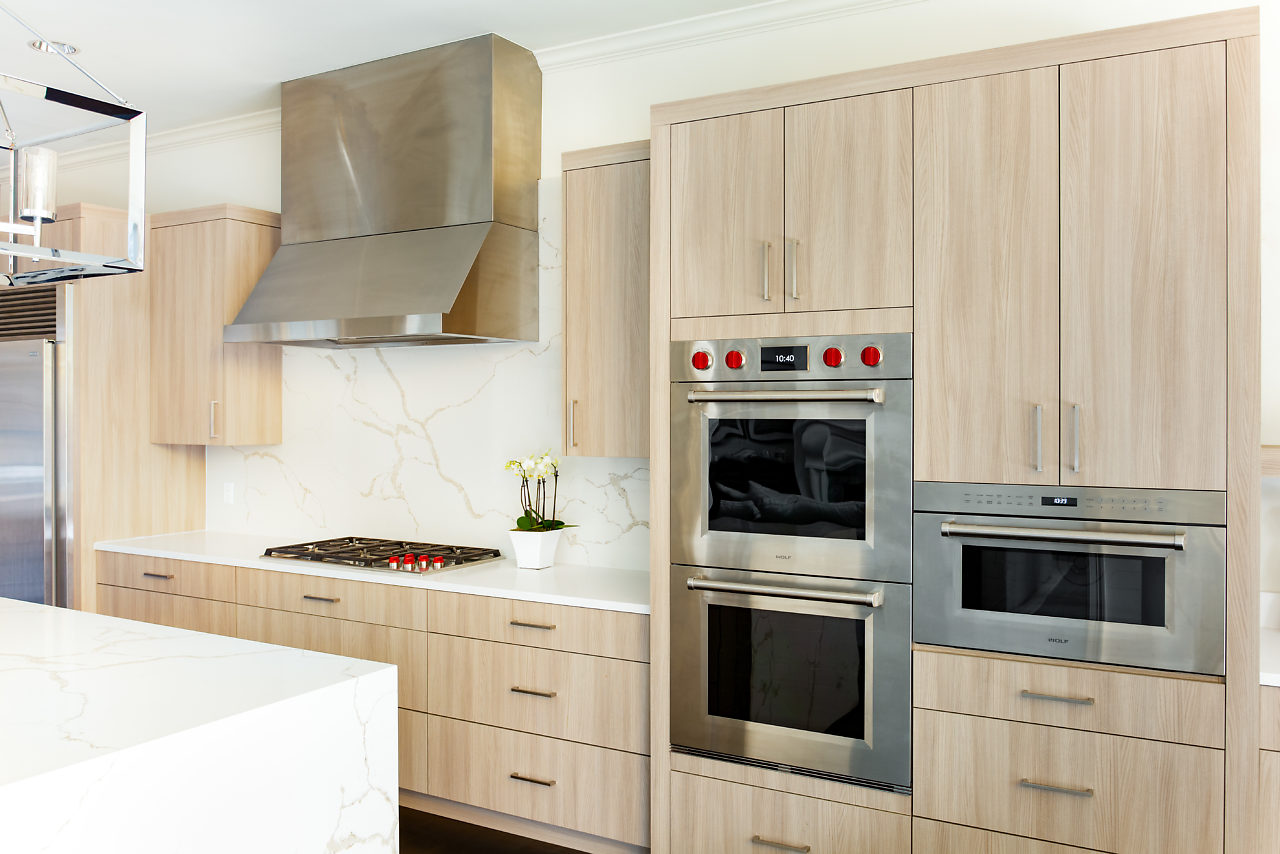 Holiday Cooking and Using Your Oven

Holiday cooking can be a bit overwhelming. Bringing a potluck dish? You want to make sure it’s the best you have to offer. Hosting the first post-quarantine family party? You have to account for enough for everyone – and their taste buds! Many of you may even like to experiment over the holidays trying to recreate a fancy recipe. You probably use your kitchen a little differently during this time, and you’re not alone! Our owner, Mary Kathyrn Reese, sat down with Garth Blackburn – our Builder Sales rep at The Jarrell Company, and Owner/Chef at Uptown Farmhouse – to discuss the questions you didn’t know to ask. Between Mary Kathryn’s love of cooking and Garth’s experience as a corporate executive chef, we’ve got some great holiday cooking tips ahead. Grab a pen and let’s jump right in!

If you’ve ever looked at purchasing a new oven, there are a ton on the market. Manufacturers take pride in offering 10, 15, or even more than 20 oven settings. Daunting? Well… not as much as you’d think. It’s likely that some of these settings are actually just timed combinations of the main 2 to 3 settings that most households are going to use: Bake, Broil, and their Convection counterparts. Garth explains that “Roast is where people tend to experiment during the holidays. They’ve never used that setting before – they get a little intimidated. They think of this beautiful, perfect, front-of-the-magazine cover of a turkey that’s perfectly browned and really juicy. So, they hit that roast setting not knowing what it actually does.” Don’t make holiday cooking more difficult than it already is!

To Roast, or Not To Roast

“I’m not a fan,” says Garth about the Roast settings because, “of how Roast works, and how food cooks.” So what does that Roast setting actually mean? What happens is the oven actually cycles through the Broil element. This means your food is getting high heat from the top only during those cycles. Yes, this will definitely brown and crisp the top and outside edges, but it will also cook that top meat faster than the rest of the food. Specifically on turkey, if you are cooking it in a traditional method, you cook with the breast side up. Unfortunately, the breast is the part of the turkey that cooks the fastest, meaning that either the breast will come out overcooked and dry. Or the other parts – specifically the dark meat – won’t have enough time to finish cooking.

When you bake, the heat only comes from the bottom of the oven. This will eliminate the breast-side-up overcooking in a turkey, but the roasting pan then blocks the heat. This creates uneven cooking and doesn’t give you that nice browning skin. “I believe the convection is going to give you the best results,” continues Garth. “You’ve eliminated cold spots, you’ve made the heat very consistent temperature-wise” and you will get “much more even browning without overcooking the breast meat first before the dark meat gets done.” Convection – in our opinion – just makes holiday cooking that much easier. 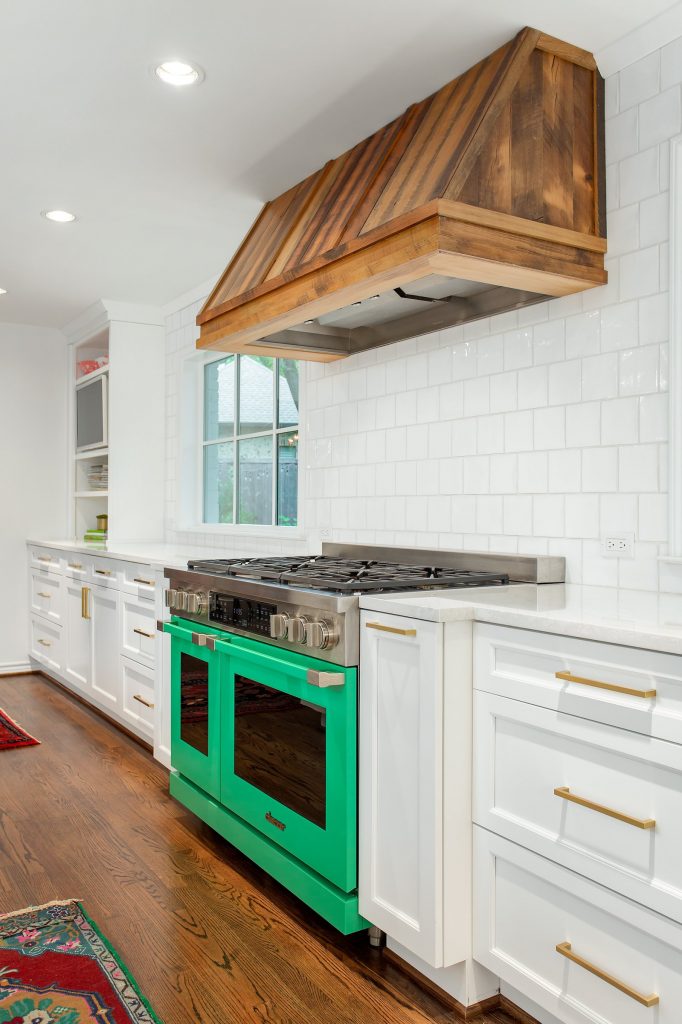 So now that we know not to rush into using that Roast button, what should we be doing instead? For most large pieces of meat, Garth recommends getting the browning started and then cooking through slowly. This gives you color but cooks through most evenly.

Bring your bird to room temperature for a couple of hours. Garth says he likes “to put a couple of ice packs just on the breast meat while the turkey is coming to room temp. That way by the time the dark meat is done, the breast meat is going to be perfectly done, not overcooked.” Turn on the Convection on High (400F-425F) to brown, then drop (around 300F) to cook through. And we all agree on one thing – your best friend will be your probe thermometer! Cooking times are typically in a range and have a number of variables. But, you’ll always know your turkey is cooked perfectly once it hits the right temperatures. Breast meat you want around 160F (as it will carry over and get up to 165F) and the dark meat you want between 175F-185F. And don’t forget to let it rest! Garth lets his rest between 45-60 minutes which gets you a bird that isn’t losing all of its juice but also isn’t scorching hot.

Or Try A Rib Roast

Similar to a turkey, you’ll still want to brown early, but at an even higher heat (about 470-500F). This is when you could even turn on your Broil setting, and rotate to brown for a few minutes on each side of the roast. Then, turn down to about 275F on Convection and cook for a longer time. This eliminates what is called the “bullseye effect” where it’s very rare on the inside, medium-rare around the edge, and well done on the outside. Cooking for a longer time gives you a more even interior, and a more moist piece of meat. Mary Kathyrn says “I brown my rib roast first on the stove” and Garth agrees that he does as well, and is his preference. However, you may not feel you have the best equipment or capability to do this. You either need a griddle (or a large enough pan), ensure you use enough oil and are able to actually pick up the roast and turn it. Those bad boys can get heavy! So, broiling is a good, and easy, alternative. 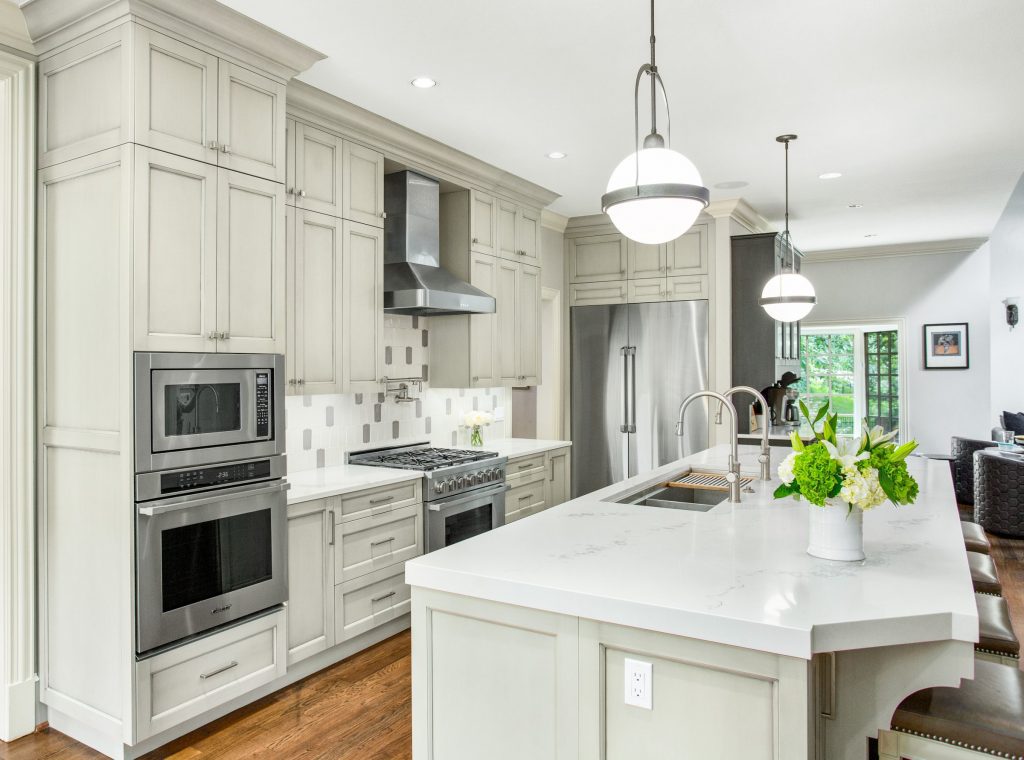 For your holiday cooking venture, there are a million and one sides out there. Green bean casserole, mashed or scalloped potatoes, stuffing, glazed carrots, macaroni and cheese – the list could go on forever! But, today we are going to focus on one of Garth and Mary Kathryn’s favorite starches: Yorkshire Pudding. Don’t know what that is? In America, a more common version (and name) could be a popover. While there are subtle differences between the recipes, have you guys tried the inverted popovers at Neiman Marcus? YUM! And of course, we’ll touch base on a popular treat for the holidays: cookies.

“Same sort of thing as any high heat cooking starch item, I would use convection for it at 375F. You do need to make sure that you let it rest – the dough or batter” to bring them to room temperature before throwing it into the oven. Garth then goes on to tell us that he likes to “use a regular recipe but then put it into muffin tins and make individual ones. You get more surface area that way so the crunchy corners that everyone always steals…” well, no more having to fight your way there first. Prefer a crunchy bottom? Garth recommends utilizing Convection Bake. The fans are on and distributing the heat evenly, but the bottom will cook faster with the Bake setting on and crisp the bottom up more. This would also work well for things like cheesecakes, quiches, or anything else that may have a crust. As a note, if you don’t have Convection settings on your oven, you can do everything the same, but increase your temperatures by 25F to ensure correct cooking times.

People have been using Bake for ages, and have been told about Convection for years. So, the first setting they typically see on their oven is Convection Bake. However, this is NOT great for something like multitrack cooking, or most approaches to vegetables or meat. In true Convection cooking, heat is coming from the back and fans are cycling that heat around the oven, creating little to no cold spots inside of the oven cavity itself. This is perfect for multitrack cookies because you can throw in several trays on different racks without having to move the trays around. All of your cookies will cook evenly regardless of where they actually are inside of your oven. I just drop a standard cookie recipe (typically 350F) by 25F (so cook at 325F) and utilize that true Convection setting. It’s a holiday cooking miracle! 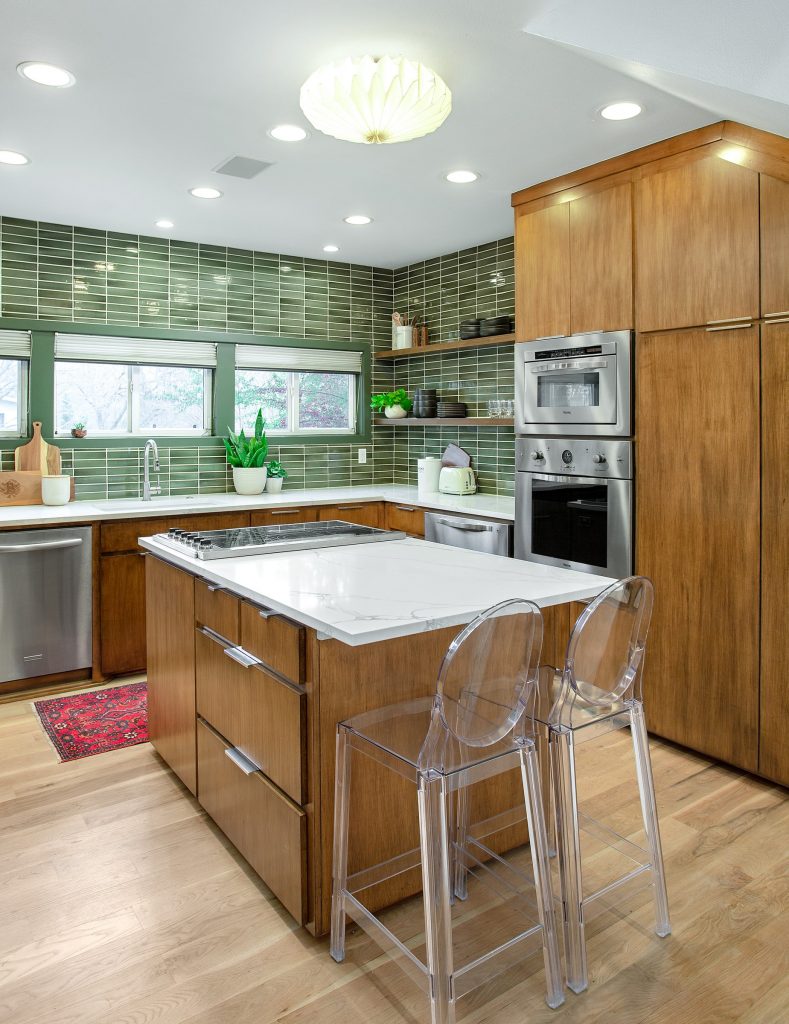 “Rebecca… when we write this up,” Mary Kathryn reminds me, “one of the important things we have to tell people: you have to preheat your oven.” Well, here I am writing it up, so don’t say I didn’t tell you! “Oh yea, that’s a good bullet point,” Garth quickly agrees.

“Don’t just preheat until the light turns off or it dings that it’s ready.” Why? Isn’t that when it’s ready to use? Yes and no. So the oven’s internal temperature at that time is correct, but the second you open that oven door, cool air from the kitchen is being let into the oven. So, any items placed closer to the door may cook slightly less than those in the back of the oven. That’s because “you’ve got very inconsistent heat in the oven, because the air wasn’t consistent, and we let a lot of the hot air out,” Garth explains. “If you let it preheat for longer, that will allow the metal in the oven to reach that temperature that you’ve set the oven air to, so that when you open the oven door, put cold food in, and shut the oven door, the metal inside the oven cavity is going to help recover that heat a lot faster.”

But what about your electricity bill and having your oven on for that additional 30-45 minutes? Not to worry (like I used to)! Garth clarifies that “90% of the electricity for the oven is in the preheat, which you have to do no matter what. It’s kind of like a car – once you get to speed, the amount of gas you’re using when you’re going 50 is a lot less than the gas you use to get from 0 up to 50. To preheat your oven for an extra 15-20 minutes, you’re talking a few cents, not even a few dollars.” So, please do not feel like you can’t preheat long enough to ensure evenness in your baking efforts. Holiday cooking won’t cost you more for preheating correctly, and your cookies will thank you later. 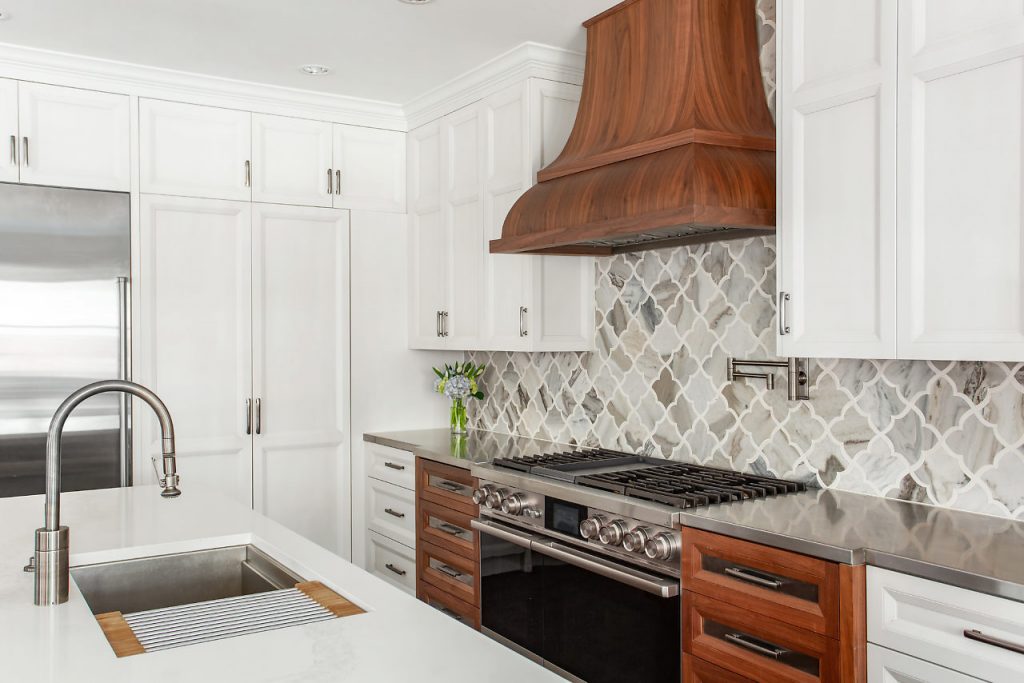 Thinking about what to make next week? Check out an older (but still relevant) post about some Favorite Thanksgiving Recipes, and bookmark our new Recipe Archive to be inspired every month! And don’t forget: the holidays are the best time to start your Kitchen Wish List and/or Bathroom Wish List so you’re prepped to start your project as soon as you’re ready.